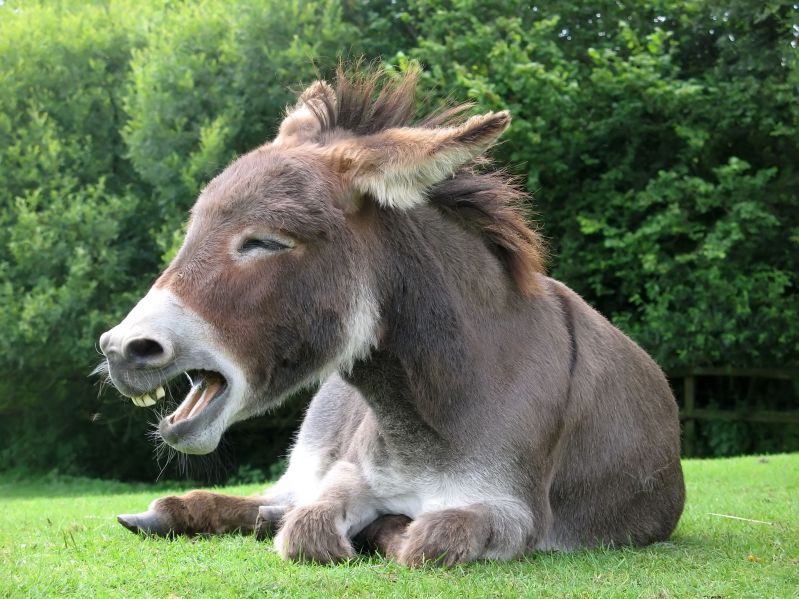 That stubborn, wishy-washy donkey; he will not move and then he will not stop. I pull the reins to the right and he goes to the left. During all of the donkey’s stopping, jolting forward, and trotting forward (as if he was on a crooked and winding path) I had to endure that donkey’s backbone.

With every step of that critter’s trot, its backbone felt like I was bouncing up and down on an angle iron that was wedged between my butt cheeks. Ouch!

This donkey had a hard time going in the direction I wanted it to go. The donkey acted like an ass was supposed to act, but it treated me less than an ass and more like what comes out of an ass. I refrained from beating it because I did not want the possibility of having my ass talk to me, like in the story of Balaam.

Balaam’s ass loved Balaam and wanted to save his life from a pissed off angel. However, Balaam beat his ass because it disobeyed him, that is until the ass got red hot mad and spoke to Balaam.

Even though I am against talking asses, one of them has spoken to me.

Even though I am against talking asses, one of them has spoken to me. Balaam’s ass spoke to me loud and clear from the pages of the bible. His message to me was, “DON’T BEAT YOUR OWN ASS!”

Now, in our day, I reckon a talking ass could very well be somebody’s buttocks cutting the cheese, i.e., “Farting.” However, a talking ass in Balaam’s case was love manifesting herself as salvation from the violence of his pending death. Balaam repaid love with violence, which tends to be the human way of things.

It took the story of Balaam’s talking ass to save me from self-violence, a frame of mind that had me burning in a never-ending fire for going in the wrong direction.

To me, Balaam’s ass represents the love that still prevents me from torturing myself with the fear of death.

To me, Balaam’s ass represents the love that still prevents me from torturing myself with the fear of death. It took the power of an ass to save me from the fear of death, as well as,  learning that love’s reality overcomes my fear of dying.

Love saves a multitude of asses.

In conclusion, the moral of this story is, “Instead of my ass following me, I follow my ass.” That sounds backward, but so does loving my enemies as myself. Love saves a multitude of asses. And that’s no bull!

“It only takes caffeine to get my whole day started …”

Please be sure to visit “The Gospel Revolution;” just click the link!

Shean Smith is a self-proclaimed Horatian satirist who leans towards being a societal iconoclast. He loves making observations about the inconsistencies of Western Society as a whole. View all posts by Shean Smith